Founded in 1983 as the Cloverdale Citrus Fair Wine Competition, the event has evolved over the years, broadening its base to a greater number of wine regions.

The competition rapidly grew in the 1990s to over 100 wineries. Eligibility was gradually increased to include all wineries in Sonoma, Mendocino and Lake Counties. Consequently, it was renamed the Tri-County Wine Competition from 1996–99. The competition expanded to the entire North Coast Appellation in 2000 as the California North Coast Wine Competition. This area included all wineries in the counties of Sonoma, Napa, Mendocino, Lake, Solano, and Marin. During this period of time, wineries and wine entries exploded and the Cloverdale Citrus Fair was now the dominant wine competition in Northern California, dwarfing even the prestigious Sonoma County Harvest Fair Wine Competition. Major problems arose with the Cloverdale Citrus Fair Wine Competition as the competition outgrew the public tasting at the local regional fair during the Presidents Day Weekend in Cloverdale. Bob Fraser, the organizer of the wine competition, met with Dennis Banks, Advertising Executive of the San Francisco Chronicle and a seed was born for future collaboration of the Citrus Fair and the Chronicle and to bring the wine competition tasting “out of the country to the City”, San Francisco.

The Public Tasting at Fort Mason Center in San Francisco is available for all wineries participating in the competition. It gives the wineries an opportunity to showcase their wines to over 5,000 consumers of the Bay Area. Any grape or fruit grown in the United States on a bonded premises is eligible for entry.

Visit the competition site at www.winejudging.com for more information. 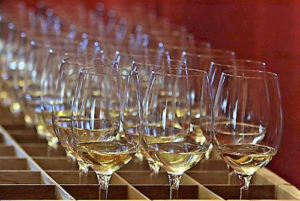