Some came for the free go bags. Others wanted to find out about products that would help them protect their home if another wildfire sparks in their vicinity.

People could learn how to prepare evacuation plans for their families and animals during a natural disaster. There was preparedness training for Spanish-speakers. Jazz and rock bands played.

There really was something for everyone at the Northern Sonoma Fire and Earthquake Safety Expo on Saturday at the Citrus Fairgrounds in Cloverdale. About 1,500 people attended the expo, which had booths for nonprofit groups as well as businesses inside fair buildings and outside on the grounds.

“We’re here making contacts and gathering information to help with rebuilding our house,” said Dan Grout, leader of the Citizens Organized to Prepare for Emergencies group in the Mill Creek and Palmer Creek region near Healdsburg

“We’re looking at water defense systems,” said Grout, whose family lost their home during the Walbridge fire. “We know it could burn again and we want to be prepared.”

It was hot at the fairgrounds — in the mid-90s — and got hotter as the expo continued from 9 a.m. to 4 p.m. Hydration stations with iced bottled water and a spigot that allowed you to run water over your head were available.

This was the first expo held in Cloverdale, and was spearheaded by Geoff Peters, program manager of the northern Sonoma County Community Emergency Response Team, trained volunteers who respond to disasters to put out spot fires and stop bleeding or give CPR. The group had a booth at the event.

The free event was postponed several times because of the pandemic, and Saturday people were still required to wear masks inside. There was free food: a pancake breakfast provided by the Kiwanis Club of Cloverdale, a lunch prepared by River Rock Casino and ice cream, shaved ice and hot dogs for the kids.

Those who attended got a free American Red Cross go bag, which included a weather band radio. Prizes of wine and olive oil were given to those who attended a majority of the 55 safety exhibits available as evidenced by stars collected on event “passports.”

“The idea is we want an educated community,” said Peters, a Cloverdale farmer. “We tried to make everything friendly and not be some dry lecture, so people can learn to be safer.”

Jose Lujan of Cloverdale said he came to show his “little man,” Jose, 2, “everything, like the first responders.” Jose Lujan Jr. was happy looking at the penned goats brought by Dr. Stephanie Larson, the region’s rangeland adviser, to show the benefits of using the animals to eat vegetation to decrease fire fuel.

“I wanted to get more information on the fires because they seem to come every year,” Lujan said. “How we can keep safe.”

Early on, the emergency response team staged a simulated earthquake disaster with two collapsed buildings, in which its volunteers, working with first responders, extricated “victims” and treated their wounds. People with simulated injuries that needed more than first aid were whisked away by Henry 1, the Sonoma County Sheriff’s Office helicopter. Ambulances came and went with their sirens blaring.

The Sheriff’s Office, Cal Fire, EMTs with the American Medical Response ambulance company, Cal Fire and the Healdsburg and Cloverdale fire departments were all on hand helping with the simulated disaster response and handing out literature.

Sonoma County Sheriff Mark Essick said the expo is “one more point of preparation that the Sheriff’s Office and the Department of Emergency Management have been working on since 2017 with the Tubbs fire.

“We now have an emergency alert system, evacuation mapping, defensible space requirements — all these things have been introduced or reintroduced to the point that you can have a fair like this and people can learn how to keep safe,” Essick said.

A spokesman for one of the home defense products, Vulcan Vents’ Nate Oliver, staged a live demonstration showing how the fine mesh and honeycomb exterior vents protected against both embers and flames, whereas regular vents don’t. He said homes in Paradise with the vents during the Camp fire three years ago withstood the flames.

“I’m so happy they had this fair so we can see these products,” said Holly Wilson of Healdsburg. “We live in the mountains and one of our structures burned in the Walbridge fire.”

Cloverdale Mayor Marta Cruz, who has been working with Peters and others to make the expo a reality, was there, posing in front of the helicopter. She said the expo was the result of two years of meetings with volunteers discussing safety measures for the people of Cloverdale. “I am a believer in regional collaboration and seeking resources that will support all,” she said.

You can reach Staff Writer Kathleen Coates at kathleen.coates@pressdemocrat.com. 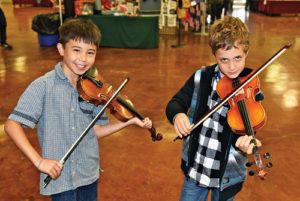